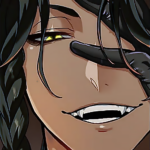 Dominating much of the Eastern Estate Grounds is the famous Hedge Maze of the late Lady Isabella Syltamul.  Vast and sprawling, the Hedge Maze is easy to lose oneself in, but should one want to try their luck, there are many secret offshoots and fun surprises to find within this twisting labyrinth.  There are two well-known intersections that one must pass to get to the true heart of the maze: the crossroads of The Star Circle Intersection and The Pointing Boy Statue.  Even still, it can be tricky to find the very center of the maze.  You’ll know if you find it, for the center of Isabella’s Hedge Maze boasts a garden that people have described as, “an explosion of color”.

The garden at the heart of the maze was Isabella’s pride and joy and one can tell that much love and care was poured into its curation.

The Bearer of the Mark

and Sacrifice to none

Our parting was like a stalemate…. Neither of us won.  Neither of us lost.   And worst still…that unshakeable feeling that nothing was ever really finished.

[OOC: continued from the Music Parlor]

Daeth draws closer to Eddellyn and they lock eyes.  His amethyst gaze almost glows as he passes through the deep threads of nighttime shadow, his expression unintentionally sharp, intense as he plunders the depths of her wintry grey gaze, not knowing what he’s looking for but searching for it, nonetheless.  And yet, even as his fierce stare cuts deeply into her and seeks her vulnerabilities, he feels unexpectedly exposed by her own gaze  boring into him.  The reopened wounds of the past are too close to the surface, hurt, fury, confusion, and undefined craving, all seething in a chaotic tumble behind the softburn of his heliotrope eyes.  As he comes abreast of her and stops in front of the entrance to the maze, a distant, detached part of him wonders what she’ll see, if anything, within his gaze.

He suddenly feels too raw, like his core was cracked wide open and everything suppressed, denied, and repressed within him has spilled forth and shattered on the ground between them.  Fragments of their shared history glitter softly in the pale light of the nearly swollen moon, like pieces of dying stars scattered across the shadowed angles of the grass underfoot, their edges as sharp and jagged as shards of glass.  Daeth looks away, has to look away, and closes himself off from her probing stare, even as he grants her reprieve from the intensity of his own.  The hard line of his jaw is tightly clenched, tense, like he's barely holding back a torrent of words behind the dam of his teeth.

After a moment, Daeth swallows and manages to put a damper on the keenness of his roiling emotions, snapping back some semblance of control over himself; at least enough to release a low, huffed chuckle.  He turns to her.  They’re close – so damn close – the air writhes within the aperture of their bodies, crackling like  something alive; a tangible thing that pushes against him and skips along his skin.  It makes  the scant space between them swelter with possibility, and the need to touch like an ache in his veins.  He wants to fan his fingers along the curve of her jaw and rest his palm against her throat.  He wants to feel the throb of her jugular fill the groove of his lifeline with its rhythm, and feel her breath flutter in countermeasure across the pad of his thumb as he scrapes it lightly over the swell of her bottom lip.

He does none of it.

Although a part of him is almost physically drawn into her orbit, unlike the last time they were in such close proximity to one another, Daeth’s blood isn’t racing and full of adrenaline after a street fight against a group of cutthroats.  He's not standing within the slanting rain of a tempestuous, god-driven storm.  He’s not filled with the headiness of fresh death, and there is no blood staining his clothing, no red wetness decorating his knuckles;  no Minotaur keeps him strung out on too little sleep.  The freshness of their separation is no longer a wide open wound that lacerated his core and chafed his thoughts as it leaked infection into his subconscious.

He doesn’t kiss her.

He simply studies her for a moment, letting his eyes sketch over the delicate contours of her face, before dropping his gaze to take in the details of her attire and note the sudden appearance of her equipment, that she somehow managed to procure between the Music Parlor and Maze.  He raises a shapely brow as a veiled grin faintly turns up the corners of his mouth.  Now Daeth reaches out, though he doesn’t grab her as might be expected.  Instead, he plucks at the luxurious, navy blue dress that sleekly skims over the curve of her hip like flowing water; the material is silky and cool between his fingers.

“It looks Monsieur Chemaux took quite a liking to you, Edde,” he says, traces of humor  brushed through the low hush of his voice.  He briefly meets her eyes.  “Because I know you didn’t commission a gown to attend a Noble’s masquerade.”  He releases the dress and watches as it falls fluidly back into place.  He can feel her tense a little, but he moves on and doesn’t ask her why she’s at a noble’s masquerade ball, dressed in an exceptionally tailored, slinky gown.   Instead, he gives her a small, albeit genuine twist of his lips as he shoots her a quick grin.  “Though I don’t think the sword really matches.”  He shrugs a bit, then turns away and moves past her, pausing just inside the entrance to the maze.

“Not here,” he states simply.  He doesn’t offer anything further as he enters the maze and begins tracing its winding path towards its heart.

[OOC: to the Star Circle Intersection]